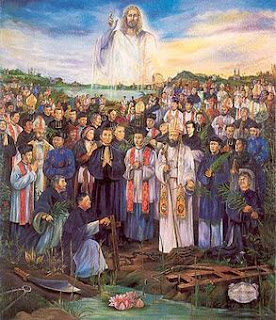 This morning, we work up to the news that all 39 people who tragically died in a refrigerated lorry while being smuggled into the UK were Vietnamese Catholics. The true background of their tale goes back a long way, since the waves of conversion to Catholicism in the 18th century following the work of Jesuit and Dominician missionaries. Between 1745 and 1862 up to 300,000 Catholics were martyred by their countrymen. This has left a strong, but persecuted Catholic minority community in the Communist country, numbering about 6.5 million, about 7% of the population.

Catholics in Vietnam, as in its bigger brother, China, have a difficult time. They are effectively banned from government jobs - teaching, police, medicine, the civil service, etc. Also when they apply for a job their c.v. and identity documents state their religion so often companies won't hire them. This is even true of the small number of businesses founded by Europeans in the country.

Therefore Catholics have to farm land or run their own private businesses. Some of them have worked hard and become very rich, whilst many of them remain incredibly poor. They tend to band together and the priests are real community leaders in the way they used to be in Ireland in years gone by. The Church in Vietnam has a high number of vocations to the priesthood and religious life, despite the low status of Catholics in civil society.

Asian mafia target these poor families, getting them to borrow money which they then can't pay back. Forcing them to send off their young adult children into virtual slavery. Has anyone noticed the proliferation of "nail salons" in big European cities, especially London? I am reliably informed that nail salon can be a euphemism for a brothel. In these establishments, it is claimed, Vietnamese girls, and boys, are "trafficked" for the pleasure of westerners, although this is not what they are promised when they are taken away from their families.

The press has reported that families were paying as much as £30,000 for the passage of their children to the UK. But the money that families"paid" for the journey was in most cases probably never seen by them. It's how much they must pay back the mafia in addition to the original debt the family owes, or perhaps as an arrangement to wipe out their debt. The families will still be reponsible for that "fee" until it is discharged; the fact that these figures are high means that the young people who are sent to honour the family debt are doomed to spend a long time as indentured labourers, in prostitution, in drug production or other illegal activities.

In many cases it will be because someone in their family was sick. Officially health care is free in the Socialist Republic of Vietnam. In reality it is private. You can't see a doctor without paying. Therefore if someone has cancer or another debilitating condition requiring long term treatment the family has no option but to borrow. Banks usually won't lend to them, so they have little choice.

The British government is right to fight the gangs that seek to make a profit out of people's misery, not least because they are also supporting drug and prostitution rackets in the UK's shadow economy. But we also need a more humane response to the problem of people traficking and smuggling, and indeed of so-called economic migrants, who as in this case bear many of the hallmarks of refugees. The solution is not necessarily to open our gates to the small number of people who make it across the channel, and let the people trafickers make their dirty money ... we would be better advised to work for social justice for the large number who are left behind in their own countries and so completely downtrodden by corrupt regimes usually driven by ideologies that seem not to value human life. These days, such places are mainly 'socialist republics' or 'Islamic republics', and their victims always flee to countries who boast neither of these monikers. Perhaps it is time for the Judeo-Christian "free world" to stop beating its breast and gazing into its navel and instead get out into the world again and spread its light.

As for those poor souls, let us join their families in praying that they will soon rejoice with the multitude of Vietnamese saints who already behold the face of God.

Popular posts from this blog

The Return of the Young Fogey?

October 27, 2011
I remember when I was a teenager my sister gave me a delightful Christmas present, The Young Fogey Handbook. It came out at the same time as the even more successful Sloane Handbook, about 25 years ago.  The essence of the Young Fogey was that he was satorially and culturally reactionary, seeking a kind of donnish gentility frozen in the period 1930-1950. He sought to relive Brideshead Revisted, Miss Marple, and Jeeves and Wooster all at once. The Handbook made a lot of Betjeman, AN Wilson, Charles Moore etc. It was an entertaining read, but I remember feeling at the time that I would never quite cut the mustard sartorially. I owned a pair of jeans.
But it seems to me that the Fogey that began all fogies was JRR Tolkien. His disapproval of anything modern, his love of tweed and pipes, and his fondness for medieval religion make him an obvious member of the group. When shown a tape-recorder by one of his undergraduates he consented to use it, but first exorcised it by reciting a Pater N…
3 comments
Read more

July 05, 2019
Dr Johnson spent a few evenings at Boswell's family seat Auchinleck House (left) where he met the young Boswell's father. Some members are orgainsing a country house part there in November, and you could join them ...
Read on ...
Fifty years ago the American conservative scholar Russell Kirk wrote these words about a forgotten part of Scotland: "Some years ago, I walked across the braes from Old Cumnock, in Ayrshire, to the village of Ochiltree. Now Ochiltree is the “Barbie” of George Douglas Brown’s grim realistic novel The House with the Green Shutters. And the Scottish village of Ochiltree is dying.
Brown described the changes that began to descend upon little Barbie in the last century: trade drained away by the building of railroads in Ayrshire, cattle giving way to coal, the carter sinking to his ruin, and the shadow of the noose upon the House with the Green Shutters. The white-harled cottage in which George Douglas Brown was born still stands in Ochiltree, and its sh…
Post a comment
Read more